2015. november 23.
Pancakes are ancient food. The word pancakes appears in print as early as 1430. Pancakes may have been around since Neolithic humans domesticated einkorn wheat, ground it into flour mixed with bird’s egg and goat’s milk and poured the batter on a heated rock. 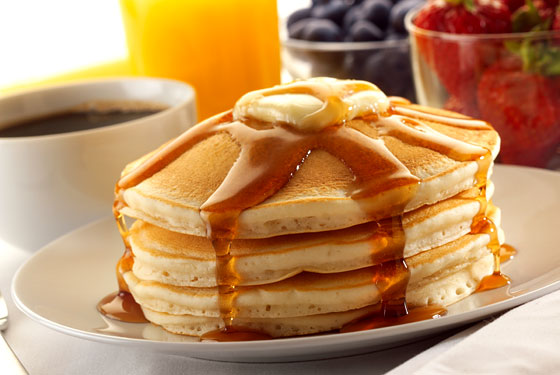 It happened before there were pans and long before ovens. The ancient cooks dropped a little gruel on a hot rock of campfire, resulting in thin cakes that were tastier than plain gruel or cakes cooked directly in the embers of the fire.

Perhaps because of this ancient lineage, pancakes are associated with rituals in many countries – Shrove Tuesday, Candlemas, and Chanukah to name a few.

From these rudimentary beginnings sprang a vast array of bread and pancakes, but the two were originally the same.

The ancient Greeks used griddles to cook a flat loaf drizzled with honey called ‘kreion’ and cakes of soft cheese.

The Romans as revealed in the cookbook by Apicius made dishes similar to modern pancakes.

Medieval pancakes, frequently made form barley or rye and lacking leavening, were relatively heavy affairs. They were quite different from contemporary fluffy or tender versions.

Pancake Day is another name for Shrive Tuesday, from the custom of eating pancakes on this day, still generally observed.

Shrive is an old Saxon word, of which shrove is a corruption and signifies confession.

The custom of dining on pancakes on Shrove Tuesday is Roman Catholic origin that on the day when all rejoiced alike in the forgiveness of their sins, all should feast alike on the same simple dish. The pancakes were prepared, denoted by the ringing of the ‘pancake bell’ from the church tower.

Pancakes are an essential part of a classic American breakfast. One of George Washington’s breakfast foods were pancakes that literally in maple syrup. He would plunge each piece of his pancake under the syrup, sopping it good before he ate it.

Pancakes somehow evolved to be exclusively Sunday morning or overnight-guest breakfast fare. Since they are easy to make and there are so many different ways to prepare them, pancakes are a favorite’s hearty food to cook for a crowd.

The first colonial settlers were taught by local Native American to make griddlecakes from Rhode Island Narragansett maize. These griddlecakes soon became a staple, known among the settlers as johnnycakes.

Pancakes prevailed as the household bread in homes with no ovens, only an open hearth.

Nothing says "weekend" like easy homemade pancakes for breakfast. Our easy pancake recipe will help you easilywhip up this weekend favorite in less than 30 minutes! When you see how easy it is to make delicious, light, and fluffy homemade pancakes from scratch, you'll wonder why you never tried the recipe before!

Preheat oven to 200 degrees; have a baking sheet or heatproof platter ready to keep cooked pancakes warm in theoven. In a small bowl, whisk together flour, sugar, baking powder, and salt; set aside.

In a medium bowl, whisk together milk, butter (or oil), and egg. Add dry ingredients to milk mixture; whisk until just moistened (do not overmix; a few small lumps are fine).

Heat a large skillet (nonstick or cast-iron) or griddle over medium. Fold a sheet of paper towel in half, and moisten with oil; carefully rub skillet with oiled paper towel.

For each pancake, spoon 2 to 3 tablespoons of batter ontoskillet, using the back of the spoon to spread batter into a round (you should be able to fit 2 to 3 in a large skillet).

Cook until surface of pancakes have some bubbles and a few have burst, 1 to 2 minutes. Flip carefully with a thin spatula, and cook until browned on the underside, 1 to 2 minutes more. Transfer to a baking sheet or platter; cover loosely with aluminum foil, and keep warm in oven. Continue with more oil and remaining batter. (You'll have 12 to 15 pancakes.) Serve warm, with desired toppings.